The 9th season of BPL T20 2022 is going to happen early in March 2022.  Surprisingly, The Bangladesh Premier League is the top t20 cricket league played domestically in Bangladesh every year. The league will be organized by the Bangladesh Cricket Board (BCB) and officially starting from March 2022 and finale will be played in April 2022.

Last BPL started with the great opening ceremony on 4 December 2019. In contrast with the previous leagues, this year the tournament will be completely hosted by BCB announced by Nazmul Hassan Papon president of BCB On 11 September 2019. BPL 2022 Schedule PDF is not announced yet.

The points table keeps changing with every game. As per double league rules, the top 4 teams of the BPL will play the Play-off matches.

The first qualifier will be played between the top two teams on the points table. 3rd and 4th number team will face each other in the Eliminator.

The final of the BPL 2022 will be played between the 1st and 2nd Qualifier match. If there is “No Result” in the final match then both finalists will be declared Join Champion.

2 points will be awarded to the winning team.

In the case of no results, 1 point will be awarded to both teams.

No point for the losing side.

In case of equal points, the team with the most number of wins in the double league round will be placed on the top of the points table.

If the win ratio is equal between the two teams, the net run rate will help to make the decision.

In case of an equal run rate, the team with the higher Wicket Rate will be placed on the top of the table.

The rules have been decided after the mutual agreement between Bangladesh Cricket Board and ICC Cricket Council.

A total of 7 teams will compete in the league. However, The Chittagong Vikings was announced not to take part in the 8th season and Board thought to replace it with two new teams. After that, in the final announcement, the decision was reverted back and the teams will remain Seven.

A total of 46 matches will be played in the following grounds located in Bangladesh.

We have seen a huge trend of BPL league searches and craze of cricket lovers getting momentum day by day. while fans around the world want to know about the schedule and anxious to plan their trip and buy tickets for BPL 2021 on time. In other words, it is a great short trip and entertainment for cricket lovers during these 46 matches which are expected to be played in the time frame of 38 days. The grand opening ceremony of Bangubadhu BPL is going to take place in Mirpur Sher-e-Bangla National Cricket Stadium in Dhaka Sunday. The tickets for BPL season seven 2021 is now available for sale. You can purchase tickets for BBPL online or from physical locations in Bangladesh.

Bangladesh Cricket Board has released 5000 tickets for the public this year. The sitting capacity for the opening ceremony is 8000 people but the 3000 tickets are reserved for sponsors, VIPs, and Players.

Chairman of BPL governing council Sheikh Sohel brief the media that we can not open the whole gallery and some seats are reserved for the BCB affiliates and VIPs. The stage is set outfield in Sher-e-Bangla Cricket Stadium, Dhaka.

There are different price categories for tickets. The lowest price of the ticket is Tk1,000 while the highest price is Tk10,000.

You can buy tickets for BPL online from these partners.

The Rabbitholebd Sports Channel released a promo of the opening ceremony. The most famous national and Indian Signers are going to set the stage on fire.

Bangladesh rock star James and pop start Momtaz will perform in the ceremony.

Indian Singers and Actors are all set to join the opening ceremony of BBPL 2021 Including:

The most awaited sizzling grand opening ceremony of BBPL will live online and on TV. The official broadcast partners will broadcast the live ceremony.

GTV and Rabbitholebd Sports will telecast the live opening ceremony on 8 December 2019. 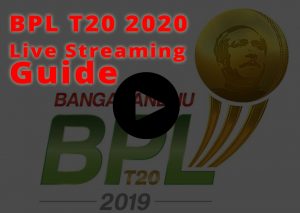 Every year BPL league live streaming rights are awarded to top tv channels by going through the bidding process. For instance, Gaza Tv broadcast all the BPL series in Bangladesh and expected to offer live matches this year also. This league has become so popular in the past few years on the domestic and intl level. Therefore, the international sports media has also joined the play. There are so many big names who live telecast BPL matches every year.

How to watch Bangladesh BPL League Online? Due to the boom in internet technology, everyone is carrying a smartphone nowadays. Similarly, TV broadcast has become less popular in the last few years. Therefore, Someone on a busy schedule and on the go wants to enjoy the BPL match online. That’s why the sports channels gone digital and provide online streaming services so the t20 cricket lovers will not miss a single ball. Like Gaza TV in Bangladesh, other counties who got the live broadcast rights of the BPL league will also stream it. Like GEO Super in Pakistan, DSport in India. You can also watch it on Maasranga. Here is the complete list of Tv channels and online apps to watch BPL7 below.

Let’s have a look upon which team will be represented by which coach and their backgrounds a little bit.

Let’s have a look upon which team will play under the supervision of which captain.